We hope you had a safe, enjoyable time off with your friends and family over the Easter Break.

This month sees the close of one of our larger projects in Browns Bay, featured in this months Newsletter, as well as a new statement issued by SPSL regarding shrinkwrap and scrim on scaffolds.

The winds of change are amongst us in the coming months, as we say goodbye to our Accounts Payable Clerk Nicole.
We wish her all the best with future endeavors and will miss her.

We would like to welcome Rachael, who will be beginning with us on 29th April as Nicole’s successor.

Working closely alongside Aspec Construction, the entire team at South Pacific Scaffolding were involved in this project from the ground up.

This was an extremely technical job, requiring skilled staff members and often all hands on deck. This project encompassed birdcages, edge protection, facade scaffolds, mobile scaffolds, alterations, and shrinkwrapping throughout the build, this project really proved to be a mammoth task.

Our entire team has been in and out of the Valley Rd site In Browns Bay, for over 18 months, assisting in the construction of the assisted living facility.

The South Pacific Scaffolding team were thanked personally by Site Manager, Hasley Haerewa states our team :
” …have been outstanding across all aspects of their work, and a real credit to your organization.
From the positive pre-start engagement, to actively talking through T.A topics and up-skilling the new guys on protocols, their attitude, and behavior in front of the public eye and the safe and cohesive way they have worked together has been refreshing and positive to the site ”

South Pacific Scaffolding would like to extend our appreciation to every single person involved in this project, you’ve all worked extremely hard, and we are proud of your efforts. 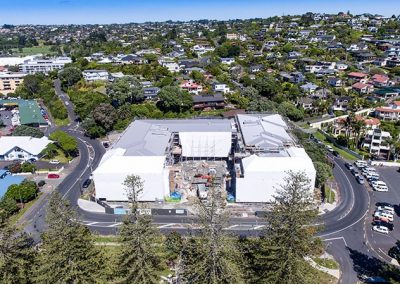 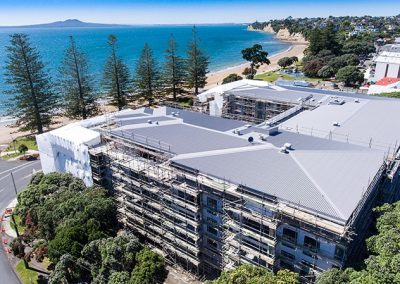 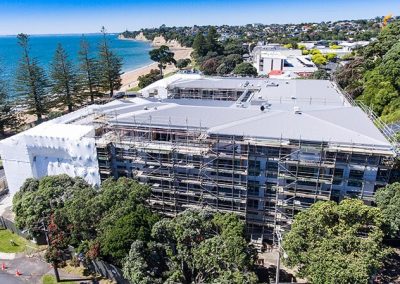 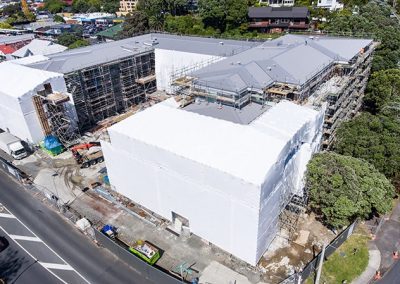 This engineering procedure involves obtaining all necessary marked up photos and plans and sending them to our Engineer, who will then work on calculations, wind loading, and any other necessary requirements to ensure the scaffold is built appropriately for the location, terrain type, and criteria.
They will issue us with a ‘PS1‘, or ‘Producer Statement‘ for the job. After the ‘PS1′ has been issued then we can Shrinkwrap, or scrim the structure.
In the event that amendments are needed to be made to the scaffold itself, we will be issued with ‘ Letter of Recommended Works ‘. After the necessary changes are made and reported back to the engineer, the ties are then signed off, and the structure is shrinkwrapped.

Engineering can take anywhere from 3-10 working days to be completed and returned from the engineer.